We Built a Railroad!

“Julian now has stores, public hall, blacksmith-shops, school-houses, quartz-mills, and a telephone line to San Diego. … When the Julian Railroad is completed, it will be a region well worth visiting.” (1888, Walter Lindley, California Of The South.) 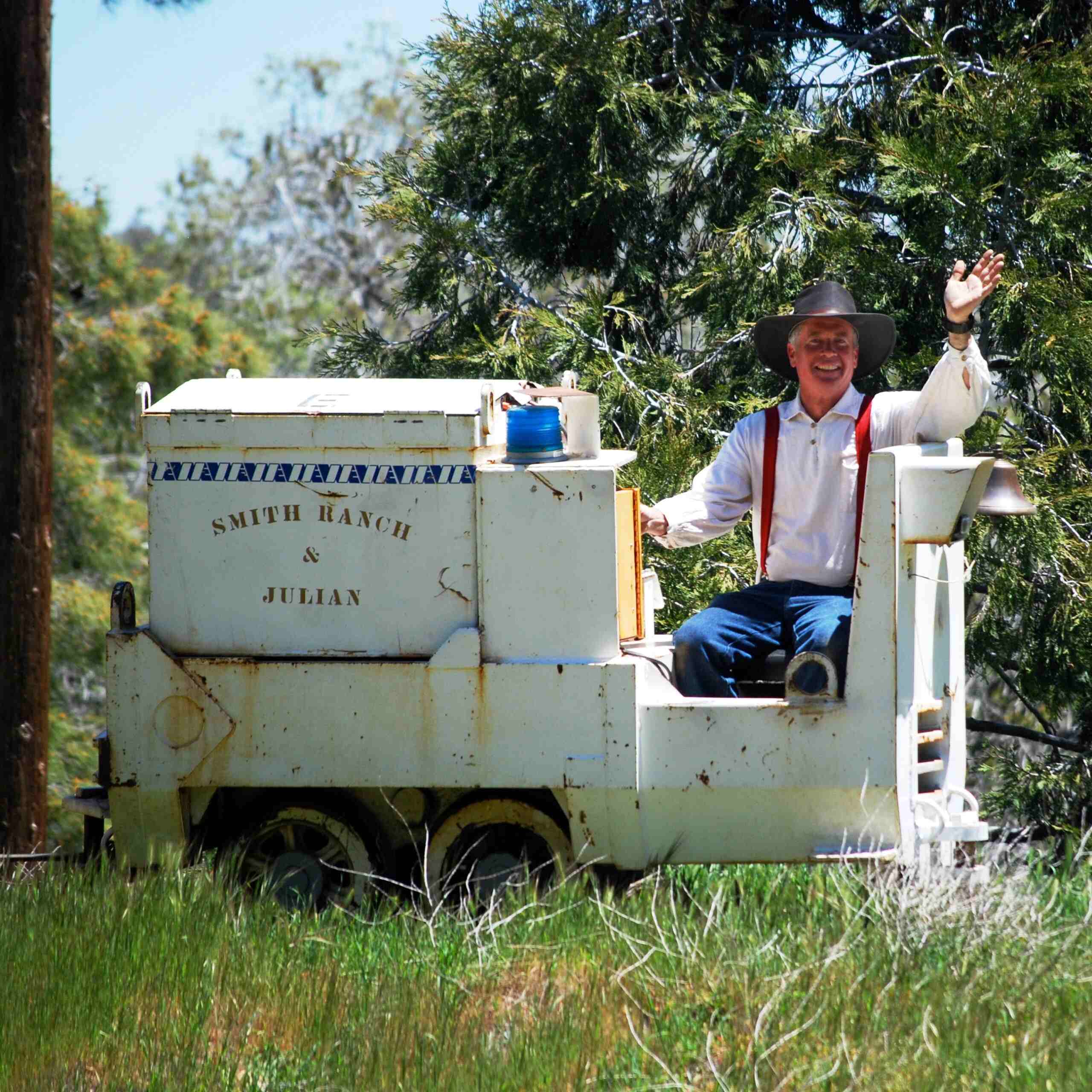 When my wife and I were children, we enjoyed riding on the train at the San Diego Zoo in Balboa park and also the now-removed monorail at the San Diego Wild Animal Park. We’ve also always loved learning about American history, so when we moved our family to Smith Ranch in Julian, CA, we began cleaning out the old Smith Ranch mine. It had filled in with debris over the years and had only a 24″ crawl space at the top. As we dug near the portal, we discovered remnants of the original door, still in-place, buried in the soil. The wooden door was 3″ thick and had been pried open. It had been hung on an 8×8 timber frame, with the hinges on the right. We also found the lock and hasp the miners had used to secure it.

We continued to dig down using pick, shovel, and wheelbarrow. We knew we had gotten to the floor when we hit solid rock. It was hard, grueling work. Early on, we found notches picked into the rock floor of the mine. It was exciting to learn that the original miners had indeed built a mining railroad. The notches were where they had placed their ties, or “sleepers”. But where was their track? We thought that we would at least be able to see rusty traces of it on the rock floor.

In the meantime, we were actively looking for mine track and an ore car to use in the mine. We were able to purchase some small, 16 pound rail in the Los Angeles area. Then, a good neighbor friend of ours sold us his swivel-dump mine car. He had used it as a teenager back in 1917, when he and his dad worked the High Peak mine next door. It was a great day at the Smith Ranch when we finally got the mine car and track home. We laid our 2×4 ties in the same notches the miners had used, about 2′ on center. We then set the “track gauge” of our new railroad to the standard small mine “gauge” of 18″ between the rails. The ore car worked great, even though it was over 110 years old. We learned firsthand that the old-timers were smart: mine cars and track are far superior to wheelbarrows for hauling muddy muck and rock. What a back-saver! 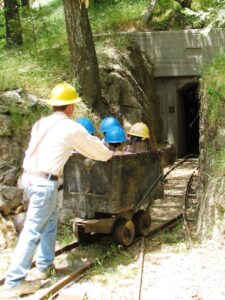 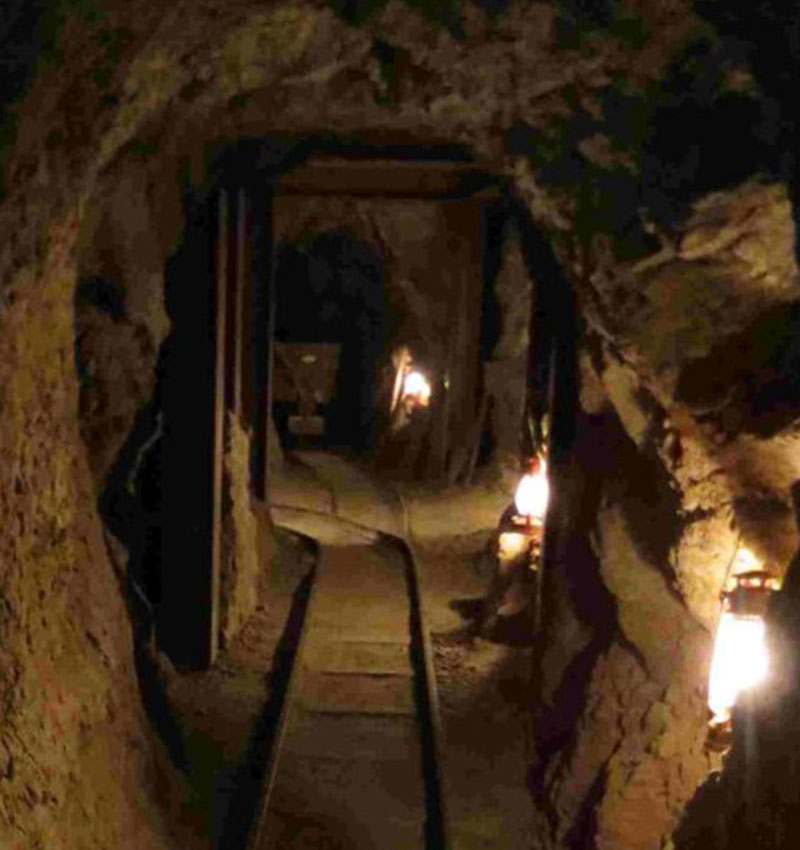 It wasn’t until some years later that we discovered some of the original track in the Smith Ranch mine. We were cleaning out an area of the tunnel around a curve and found two parallel “roots” on the floor. We kept digging. The “roots” turned out to be two, 2×4’s laid on edge. The original miners had actually used wooden railroad track. The 2×4’s the miners used were not like the ones used today, which measure 1 1/2″ x 3 1/2″, but were actually a full 2″ by 4″.

We rebuilt an old flat car found in a shed on the property. It had originally been used to haul an ore bucket by the previous landowners, but our kids now used it for a “rollercoaster ride” out of the mine. After several trips off the end of the track at the tailing pile, we discovered two more pressing needs on the railway: brakes, and a new bridge. And so the SR & J Railroad grew.

It took over two decades of hunting, searching, and building to get the SR & J, or SMITH RANCH & JULIAN GOLD MINING RAILROAD, to its peak. Wheels, mine rail, and equipment was purchased from rail yards, mines, and museums all over America’s southwest. We have rail made by CF&I (Colorado Fuel & Iron), Illinois Steel, GH&H (Germany), Lackawanna Iron & Coal Company (Pennsylvania), and more. The oldest rail dates back to the time of the American Civil War and has a distinct profile. Some of the rail was brought across America’s first Transcontinental Railroad to the Nevada silver mines in 1884.

Included in the SMITH RANCH & JULIAN RAILROAD was a wide variety of rolling stock, including passenger cars, tank cars, timber cars, ore cars, and more. Five of the seven locomotives were 3.5-Ton, Atlas “K” storage-battery-powered, gold mining and tunneling locomotives. (The 60V, 525Ah batteries weighed over 2700 pounds! And unfortunately, Costco and Walmart don’t carry them.) Because the locomotives were electric, they were non-polluting and environmentally-friendly. Each locomotive was rated to pull dozens of tons of mine cars on level track.

The SMITH RANCH & JULIAN RAILROAD was something quite unique and special. The railroad is no longer open to the public.